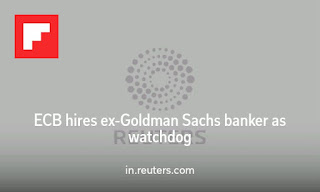 FRANKFURT (Reuters) - The European Central Bank has hired Elizabeth McCaul, a former Goldman Sachs banker who later led an audit of the Vatican's scandal-ridden bank, as one of its top banking supervisors, it said on Thursday. She is one of three new ECB representatives on the Single Supervisory ...

To be considered for employment opportunities mentioned on Careerhedge.com send your resume and contact details to es@careerhedgenightlynewsletter.com or call 602.730.0711